When the poor are faced with the total domination of global corporate power, do they meekly comply or as James C Scott suggests, turn to the ‘weapons of the weak’ - those subtle yet undermining tactics of ignorance, false compliance and foot dragging?

The organiser of the Tour de France, ASO, is no puny organisation. But faced with the prospect of Chris Froome riding the Tour with a doping investigation hanging over him, and seemingly no choice of barring him from the event, what can they do? Public hand wringing is one thing; a legal battle likely to be a mere performance; but secretly making life difficult comes straight from the playbook of subtle resistance.

How can ASO do this? One option: give Team Sky the shittiest hotels in France and reward his rivals, Ag2r for instance, with the best. As a strategy it might not have the teeth of an angry badger, but it’d be a sign that ASOs public statements were more than a performance.

So what have ASO actually done? Like previous years I’ve crunched the data, using Trip Advisor to score the hotels listed in the Tour de France roadbook. The results are interesting to say the least.

First up, how do this year’s results compare to last year’s? Interestingly, there’s been a decline in the average daily satisfaction rate: does from 76% in 2017 to 74% in 2018. Moveover, the gap between the best and the worst has increased: this year, there’s a 14% gap in the average daily satisfaction scores, with the top team getting an average satisfaction score of 82.4%. Last year, the gap was only 10%. All this means that the team with the best hotels this year has slightly better hotels than in 2017, and the team with the worst hotels this year has slightly worse hotels than last year’s lanterne rouge.

The question you are all asking is what about Team Sky. Well, if ASO truly were fed up with Chris Froome, then might have given him some dodgy hotels. In fact, the winners of this year’s Hotels du Tour GC are, you guessed it: Team Sky. Incroyable! Last year, Team Sky languished in 20th place on the Hotels GC, but in the three years before were in the top 5. BMC and Movistar have also fared well in the past. 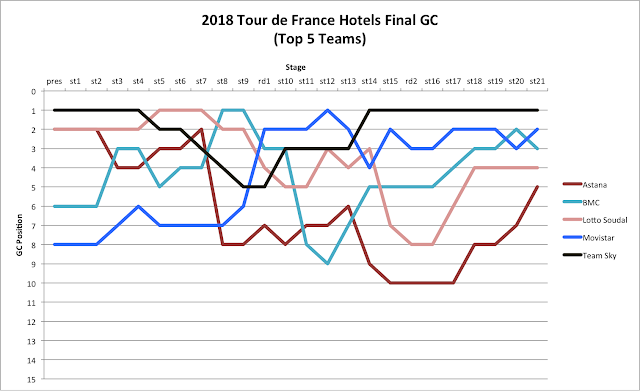 Worse still, ASO have done no favours to French favourite Romain Bardet. Whilst Team Sky’s rivals BMC and Movistar are also in the top 5, poor AG2r finish last in the Hotels GC. Sacre bleu! Don't ASO want a French winner of the Tour de France? In fact last year, they finished 10th - their highest ever GC position over the last 3 Tours. 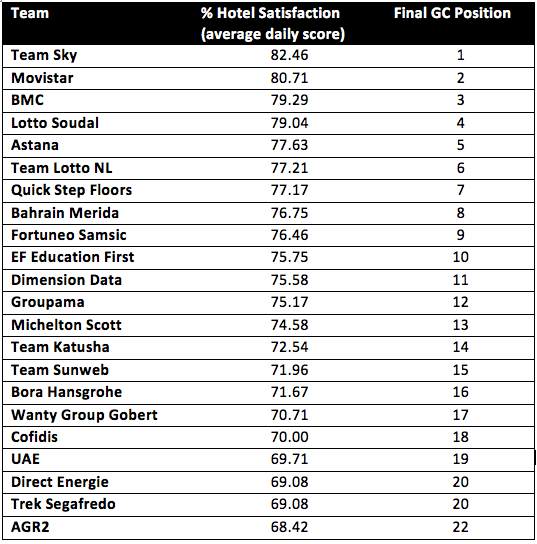 Despite its public desire to exclude Team Sky’s leader from this year’s Tour, ASO have done them every favour when it comes to hotel selection. Maybe secretly they love Chris Froome, or maybe they have a poor grasp of the art of subtle resistance. Or maybe something else is going on? Is there a gap between the leadership of ASO and those on the ground choosing who gets to stay where? Or are  Team Sky slipping ASO some extra Euros to ensure they get the best hotels?