Journalists seem to be struggling for decent accommodation at this year's Tour de France...

But the riders seem less stressed.

Unlike last year, there's been no mass complaints about the quality of their accommodation, at least not yet. Have they got other things to worry about? Maybe, as someone better connected than me suggested, last year's complaints were part of a political battle between the teams and ASO? Or maybe ASO just acted on their complaints from last year? Maybe they even read this blog!

Like last year, Ive used the Tour's road book to identify all the hotels the teams stay in, and crowdsourced big data, i.e. Trip Advisor, to measure the quality of every hotel. Here's the classification provisoire - I need to check my calculations, as Sean Kelly might say..

This year the fight for the GC has been very tight. Trek ran out winners after never dropping out of the top 5 for the entire race. Bora, meanwhile, came from 13th on stage 12 to finish as runner-up. Super teams like Sky and BMC are also up there.  Trek have the highest average satisfaction at 78.49%, but Bora are very close behind (78.23) - maybe the closest Tour finish since 1989? 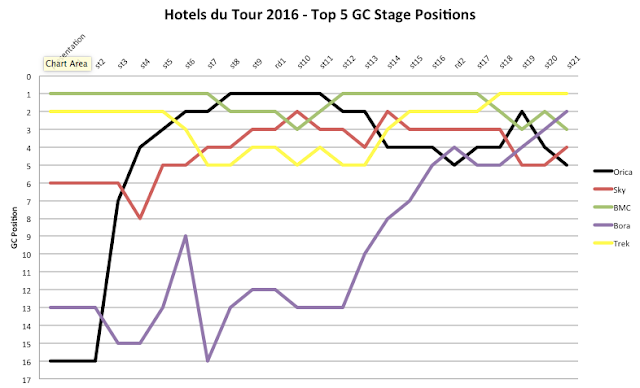 In light of last year's complaints about the hotels, its interesting to see that the overall levels of hotel satisfaction are up by 5.5% this year when compared to last year's figures.

Another thing that is interesting is that Orica, Sky and BMC have finished in the top 5 two years in a row. But its Trek who climb the GC rankings like Pantani - they were down in 20th last year, rising 19 places to top the GC in 2016. Lampre also had a big rise in overall satisfaction, but that only took them two places up the GC. Dropping like Chris Froome off the Peyresourde was team Dimension Data, falling 13 places. And despite the number of stages they won (see below), Lotto NL Jumbo also fall 12 places. 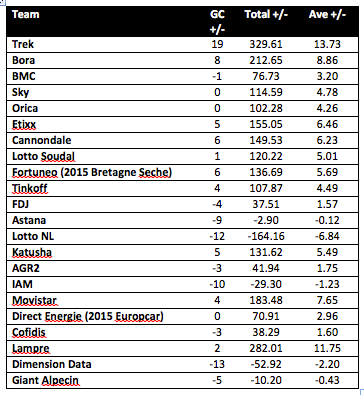 Lotto NL Jumbo have the most 'stage winning' hotels at 5, followed by BMC on 4, then Lampre and Orica, IAM and Katusha on 3 stages. There are some dead heats and one decision by the commissaires jury for Tinkoff on stages 14 and 15. Their hotel does not feature on Trip Advisor. In fact it doesn't feature on any hotel website. Chateau des Creusettes is exclusive. So exclusive that you can only book privately. Fortunately, just like the UCI rules, my analysis has a bit wriggle-room and by the looks of things it deserves to get 100%. 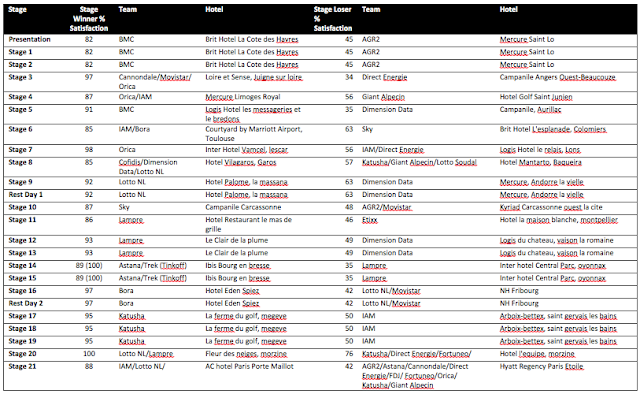 The Best and the Worst

The Chateau des Creusettes is not the only hotel to get 100% satisfaction. Stage 20 see Lotto NL Jumbo and Lampre share the Fleur des Neiges in Morzine. Meanwhile, Direct Energie get to stay in the worst hotel of the race on Stage 3 - Campanile in Angers - that had just 34% satisfaction. Last year, one of the worst hotels of the race was the Hyatt Regency Etoile in Paris on the last stage. All the teams were put up there. This year, there's a bit more diversity: some teams get to stay in the AC Hotel Paris Porte Maillot, which would have been appropriate if Contador had won the race. For ten teams, their jour sans comes on the final stages the Hyatt. Whether the after race party means they'll notice or not is another thing. 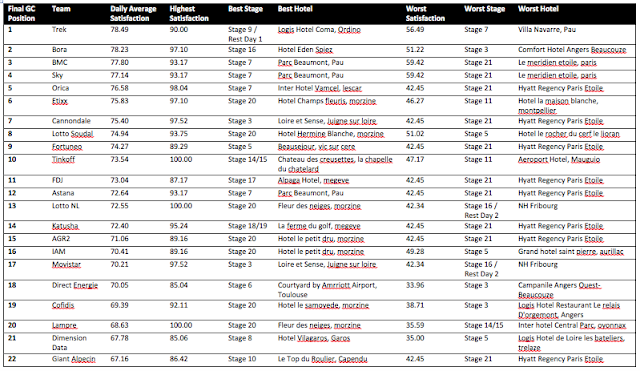 Last year, the hotels in the Alps - particularly around Gap - were the subject of most criticism by the riders. Hotels without air-con, or in Team Sky's case, located next to an abattoir. This year, when the race enters the critical period in the Alps, the riders have the best hotels. For stages 17-19, the riders get to stay in the same hotels which collectively have the 2nd highest level of satisfaction. The highest comes the day after in Morzine. The lowest though is in Paris... 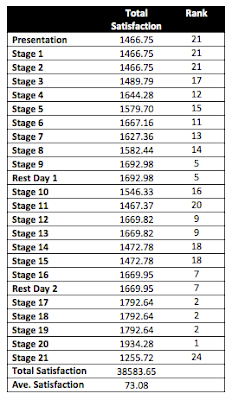 From this quick look things might seem a little closer than last year. Compared to last year, the gaps between the top and bottom is narrower. Giant Alpecin may have finished last, but their overall score is still relatively high at 67.16% which would have put them in about 18th place last year - that's also 11% higher than last year's lanterne rouge. So, maybe ASO have a new algorithm to help them spread out the decent hotels? But there's still a ten point gap between top and bottom. And not everyone gets to stay in an exclusive Chateau like the Tinkoff's Chateau des Creusettes.

Update 1: Overall levels of hotel satisfaction are up by 5.5% this year when compared to last year's figures.