This was my last ride for a while as Ill be off with work. I did this Evan on our usual route up to Caerphilly and back: 20kms in under the hour: not bad going. I dont normally like to time myself over the same rides because there are so many other things that can affect your time, like how many people are in the way on the taff trail and things like that.

When I lived in Swansea I used to time myself over a set course. I used to go out in the evening and time myself on the course below. Only trouble was that I used to just blast from the gun, then blow up on the first climb up to upper Killay, about 2 miles into the ride. It usually took about 45 mins, but there was a really dodgy descent and in my keenness to beat my record I used to take some risks. The last time I did it, my gear cable snapped and I was stuck in top.

I have strict views on cycling. Cycling should be enjoyable. Going up hill can be enjoyable. But going up stupidly steep climbs is just stupid. With some exceptions, any road that is more than 15% should be banned to all cyclists. Enjoyable climbs should be alpinesque - these are pleasurable. Anyone who gets pleasure out of climbing really steep hills is just nuts. This is why I would never ride up Porlock hill; why I wouldnt be bothered with Woolacombe hill; and why Id rather ride longer than go over caerphilly mountain (main road route).

So why did I today ride up the steepest climb near Cardiff? That's right the lane from Gwaelod y Garth up to Pentyrch. Probably because I'd never done it before; compact gearing makes anything seem possible; and the profile of the hill doesnt seem to bad on the computer, despite its two arrows on OS maps.

I got up, but it was bad. Walking pace. Heavy breathing. Grunts. Not nice. I wont do it again, ever. For good measure I also rode up past Castell Coch. We used to organise a hill climb up here, but I struggled to find the climb until the end - so in that sense it was a good climb, but I expected more. But after going up the Garth, probably anything seems easy.

Just noticed that the altitude gain on this 20 mile ride is nearly 400m, not bad.

According to this, wearing compression clothes helps your recovery. That means you can ride longer, harder, faster. Or as they put it:

"Skins™ BioAcceleration Technology™ has been developed over years of scientific research. Ongoing testing of elite athletes have proven that Skins™ BioAcceleration Technology™ creates marked improvements in reducing the build-up of lactic acid immediately after periods of sustained exercise (2hrs and 15 mins up to 37% ), and allows for more rapid return to normal levels (up to 38% at 20 minutes). You experience less fatigue, minimise soreness and recover faster".

My legs are still tired from yesterday: I had to put it in the middle ring on the way home from work today. So at this rate, I thought Id need all the help I can get so Ive invested in some of this. Not the skins stuff - thats exhorbitant, but a nice pair of compression socks, that'll even help me stop getting DVT on the way to New Zealand in a weeks time.

And here's a pic of me wearing them: 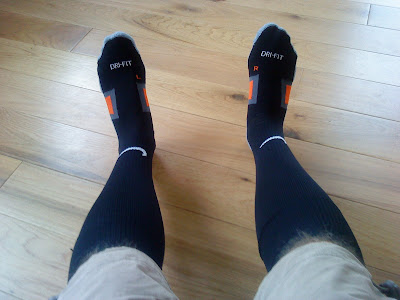 Please note: hairy legs. Not sure when to shave them, probably not until a couple of weeks before Ventoux.
Posted by Gareth at 11:54 No comments:

Another sunday morning ride followed by a swim. Went out via the lanes and managed to get a tow off a tractor coming into Cowbridge. Once I had a tow off a van from Barnstaple to Braunton at 40mph: he had zero acceleration and once up to speed it was really easy for me. Anyway, I went round the back of Cowbridge through some fiddly lanes and then was overtaken by someone on a Cervelo. Nice bike. I caught him back up at the start of the climbs and we had a chat. He had done 70 miles the day before and was on a short quick ride. I would have gone a lot slower had he not been there and by the time I went a different way at Bonvilston I was a bit tired. Coming back into Cardiff I decided to go over Rhydlafar. I got back in just over 2 hours - and the best average speed of the comeback so far!

Today I learned that going up Rhiwbina Hill is not a good idea. Not that it is not a nice climb - in fact I think it is, particularly if you wanted to go up over Caerphilly mountain. No, more the fact that it means 5 minutes into the ride you are faced with a pretty tough little climb. Within about 5km you have almost climbed to 200m! After that shock to the system I didnt feel like doing much else so just trundled around the taff trail which was surprisingly quiet for a saturday afternoon.

Got back from work and went straight back out on the cross bike over Caerphilly mountain. Rode up the Taff trail and then over the top and then dropped down through the woods back to the Taff trail. Took the descent quite easy, but felt good on the hills. The gears on the cross bike are great - the 34 gives plenty of options on the steep bits, and the 50 means you can big ring it over little rises. Came back through Radyr where I tried to big ring it, but failed.

Was meant to go out after work tonight, but was in a meeting until 5.30 and didnt leave work until 5.50. Slacking. Will have to go out tomorrow, but that might mean 3 days in a row...
Posted by Gareth at 12:27 No comments:

The Long Way Home from Work

Today I came home from the work the long way. To be precise, it is about half a mile longer than the way I rode to work in the morning. The main difference is that I went through the park a bit further rather than riding through Llandaff North. If I did it everyday, that would be an extra 5 miles a week!

This was my first Sunday morning ride on the road bike in a long time - I cant remember the last time I went out on it. So I spent the night before checking the bike over, making sure it still worked. Given my blow up on thursday, I was a litle nervous. This was the route I was supposed to be doing, but fortunately managed to get lost. And my lowest gear was 39x23, which was not as low as I would have liked.

In total the ride was just over 51km and I went a bit wrong in Dinas Powys. Fortunately the barrage was just being lowered as I arrived so there was no hanging about there like last time I went over it.

The route was relatively flat, only one climb that I was worried about - up from Peterstone super Ely to the A48. In days gone by this was an infamous 'col': one time I was dropped when out training but then managed to crawl back on and then drop the rest. But that wasnt going to happen today. For a start, I was on my own.

I took all the hills slowly, just in case. But I had a bottle and a banana, but no money which Id forgotten. The highlight was the section between Sully and Penarth. Id really suffered along here on Thursday. I found out why: it was actually a false flat, so I was able to hammer along here in the big ring. The descent down into Wenvoe and the ride across to Dinas Powys was also quite good.
Posted by Gareth at 11:20 No comments:

Evan often comes out with me on the back of my cross bike. This is the first time that we had both been on the new cross bike together. We did our usual ride going up to Caerphilly on the Taff Trail and back with a slight diversion along the higher trail. There we came across a tree blocking the path, so he had to jump over that. The ride took just over an hour.