The Bwlch: A reconsideration

Ah, the Bwlch. Disparaged by me as a Hollywood climb in my last post.

But still, rides over the Bwlch (and Rhigos) usually lend themselves to stories and memories. Like the time I first rode over both in 1990. Leaving Swansea in a massive tailwind, I flew over the warm-up climb of the Cimla and was blown up the Afan valley. By Blaengwnfi the sky had turned black. Rain turned to snow by the Rhigos. Rounding the hairpin, I could see only white, the snow blasted into my face. Into a gale, I struggled through the 5 miles to Glynneath. There, I stopped under the by-pass to eat a Mars bar (that was 90s nutrition) before carrying on up over the hill to Seven Sisters and back down the Swansea Valley. By the time I was back at Hendrefoilan student village, the rain had stopped, the wind died, and the sun shining. Typical. But probably one of my first epic rides in the valleys. In the days before the internet, I didn't need Strava's suffer score to tell me how to remember that ride.

In south Wales cycling, the Bwlch needs no introduction. Mention the Bwlch and everyone knows where you are talking about, even though it just means a pass or col. Imagine saying to someone in the Alps that you went over 'the col' - which one they'd ask. The only qualifier to saying you went over the Bwlch would be which way - for there are 3 different ways. Graham Robb explains this problem in his excellent 'Cols and Passes of the British Isles'. Its thanks to the Tour de France, Robb argues, that col has become shorthand for mountain, when really its just referring to a gap between two mountains. Its the same for the Bwlch too: the mountain we know as the Bwlch actually has three bwlchs in close proximity. Most probably imagine Bwlch y Clawdd as the Bwlch. But as one chap said to me disparagingly: "most people don't go to the top of Bwlch", by which he was referring to the 100m higher Bwlch yr Afan - sort of like carrying on to the Col de la Croix de Fer after completing the Col du Glandon. Which probably proves Robb's point: even in Wales, rather than a 'mynydd', bwlch has come to define a mountain to cyclists.

Definitions to one side, the three routes up the bwlch(s) offer challenging terrain. The classic ways are all different. From the south, the steep section is from the clock tower in Price town, but the lush pasture, forest, rocky cliff face and hairpin give it the sense of the alps. From the north, the shadow comes not just from the mountain but the Rhondda's industrial legacy. And from the west a more sparse, empty and desolate experience.

But wait. Did I say 3 routes up the 'bwlch'? Make that 4. Yes, just like Mont Ventoux, there are four (possibly more) ways up (what we call) the Bwlch. The fourth way up - just like Ventoux's - is off road. From Treorchy, head straight on to Cwmparc rather than the road to the north face. By the baptist church take a right up a steep street, before turning right onto the forest road through Tyle Coch. The forest road twists its way over the ridge of Graig-fawr. Turning left you can rejoin the main road at the hairpin on the western ascent by Bwlch yr Afan. Or turn right to go up through the new wind farm and the summit of the Rhigos (which perhaps to the aghast of many, isn't listed in Robb's book as a col, bwlch or pass). 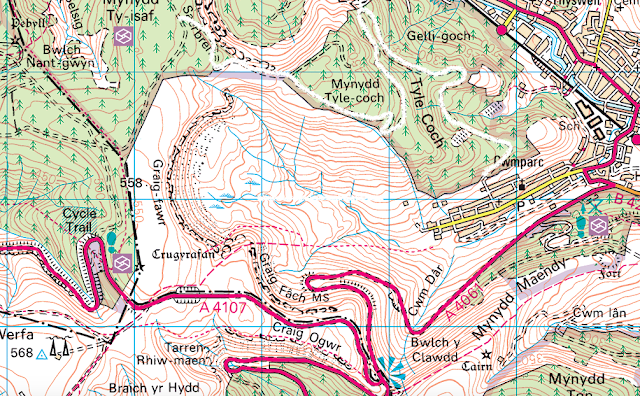 You can see the route at the top of the map marked in white. Strava says that the climb is 4.4km at 5% - or more like 6ks if you include the first part of the climb on the road. In numbers, thats similar to the other ways up the Bwlch. But what is it like to ride?

I had to wait a couple of weeks to try. Resisting the urge to do it in snow, I waited until the weather looked better. I took the quickest way to Cwmparc at the base of the Bwlch. Sunny in Cardiff, by Treorchy it was raining. Things werent looking promising for the ride I had planned. Still raining, the first part of the climb proved to be the hardest - first in the streets of Cwmparc, particularly after turning right by the Baptist church, and then the early off-road sections. At this point, the sun returned and I found myself riding through the clouds.

The secret road to the Bwlch

More loose stone than gravel, the climb was relatively easy, punctuated by a few short descents. Emerging from the woods, a plateau affords a fantastic view of the Bwlch and Rhigos road climbs.

Above: Looking over to the Bwlch
Below: In the opposite direction the Rhigos

It was at this point that things decided to go pear shaped. A rear wheel puncture was easily fixed, but when I decided to press on to try and follow the forest roads to the Rhigos. By this time the weather had closed in again. Windy, with a feeling for snow, I punctured again on a short descent. Using my last spare tube I reasoned that my tyres weren't really up to it and retreated to the safety of the main road over the Bwlch before starting the long descent to Cardiff.

The rest of the forest road would have to wait (perhaps for a better bike and/or wheels). But so would the 5th way up the Bwlch: in planning my ride I found another way to the Bwlch from Clydach Vale.

I have a confession. I don't like the series of 100 Climbs books, particularly the new Wales book. Its nothing personal. I mean, as a lightweight, the hills should be my natural territory. It's just a couple of things. I'm fed up of the fetishisation of 'the climb'. Maybe it works in places where the climb is the ride. I mean, riding up and down the Galibier will take up most of the day. But in south Wales, where the climbs are 1-3 km, a ride is about where you are going not just one climb but several. Its the combination that makes a ride: that’s what makes cycling interesting. And then there’s some of the choices, and omissions. Take the road to Penrhys. Seriously, one of the 100 greatest climbs in South Wales? What’s interesting about Penrhys is the decision to build a housing estate on an exposed mountain-top, not the nondescript 1km 10% straight road, hard as that may be. And, its about where that road might take you, like the nearby Blaenllechau climb from Ferndale, sadly absent from the 100 climbs list.

So in no particular order, here’s the start of an alternative 100 climbs of south Wales. They’re worth riding because, yes, they are hard, but also interesting.

A staggering omission from the 100 climbs is the ‘Ponty Trifecta’ – 3 lung busting climbs out of Pontypridd. If your training and want to test yourself, race up the Graig, hoping that the traffic lights are in your favour for your Strava segment (there's also a back way too if you fancy it). Descend and then ride to Llanwonno via Graigwen. Unrelentingly steep out of Ponty, once over the cattle grid the climb never lets up, its just the countryside is more pleasant to look at. Once at the top either go in the pub, or descend to Ferndale and retrace your path up the Blaenllechau (see below). When you’ve done that its time for Ponty Golf Club. Be prepared: the +30% hairpins at the top are the least of your troubles – grinding over the cattle grid requires serious concentration. At the top, if your bike allows, take the gravel track to the real summit, or just look down on the post-industrial landscape below and all those climbs on the surrounding hills.

If climbs are about going to as well as going up, where should you head? There are a number of ridgeways running along the top mountains that divide the valleys in south Wales, some narrow, some bumpy, some gravelly. By far the best must be the Manmoel road between Oakdale and Ebbw Vale. But there are others: across Gelligaer common; Mynydd Bedwellte from Markham to Tredegar; Mynydd y Grug from Wyllie to Machen; and Cefn y Brithdir from Pontlottyn to Aberbargoed.

The climbs to those ridegeways are all great, all different. Try the 3kms of 9% from Machen up Ty Canol Lane; from Taff Merthyr Garden Village up to Gelligaer common (or maybe this way is better); from Abertysswg or New Tredegar to Mynydd Bedwellte, perhaps stopping at the Cholera cemetery at Cefn Golau.

Alternatively, try the steep corkscrew climb out of Georgetown and up onto the Manmoel road; or the bleakness of the narrow farm track onto Cefn y Brithdir from Pontlottyn or the steeper side from Aberbargoed. There are other ways up too: don’t be constrained by this list. 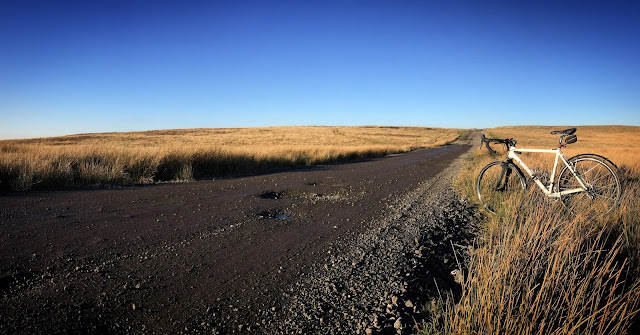 The Bwlch and the Rhigos are the 'Hollywood' climbs of South Wales. Doing the two in one day? Now, thats a ride. but the fame heaped on these climbs is undeserving: just as the locals know that Alpe d'huez isn't particularly special, its infamy marginalises other more worthy climbs. So, if Daniel Friebe wrote about cycling in Wales, what would his 'indie-boho hipster climb’ be? Perhaps the road to Abercarn Quarry;Or Troed-y-Rhiw Road to Mynyddislwyn starting in the appropriately named Wattsville?

My choice is Blaenllechau. A hidden gem, it goes up in sections, the top hidden from view til you get there. The last two sections seem to repeat themselves: when you return you’ll think you are nearly there, only for another steep pitch to move into sight. At the bottom are two sharp hairpins. Not the long sweeping bends on the Bwlch or Rhigos, but proper switchbacks. The first you can hit at speed, freewheeling and drifting wide under the retaining wall, that give it the appearance of the first km of Alpe d’huez. At the top, a huge slag heap, flowers and memorials to those departed, and a view of brightly coloured terraced houses in the valley below. Yes, this is the Valleys.

These arent the hardest climbs. The hardest climbs are those within touching distance of home, encountered after 4 hours or more low on energy. In Cardiff, that could mean Rhydlafar: just a pimple, but enough to question whether its worth turning right at the bottom to do the extra miles to avoid it. Or, the lanes around the back of Pontprennau and the sharp rise to Lisvane: you’ll have gone that way to avoid being battered by a relentless headwind on the flats. But was it really worth it? The feeling at the top of these ‘climbs’, of now being home, matches anything you might experience in the Alps.

We can write the story of a climb in different ways. One way is numerical: their gradients, their lengths, the power required. We can put all this together and rank them out of 10. What's lost in this objectivity are the stories and memories of how these climbs made us feel. The best stories of climbs are written by our own experiences, different for each of us, varying at different times, states of fitness, alone or in company. As others have said, The only way to truly appreciate cols is to pass through them and the only way to truly appreciate the stories they tell is to seek those stories out yourself". And in doing so, lets write our own stories of the climb and tell them to others, for this is what we should want to ride for.