Who needs a motorhome?

Team Sky’s motorhome, unveiled at the Giro d’Italia in May 2015, was supposed to provide the best recovery environment for their team leader – Richie Porte. No more would he be subject to the vagaries of a different hotel everyday with their dodgy beds, mouldy tiles and iffy wifi. Regular, standardised comfort was the name of the game. That the quality of hotels was seen as a problem by riders was magnified when the UCI banned the use of motorhomes. Other riders took to twitter posting pictures of the bizarre dormitories and sleeping arrangements they’d had to put up with.

Stage race organisers say they try to equalize the quality of accommodation between teams. When it comes to the Tour de France, organisers ASO say they visit each hotel they use, rate them on a scale of 1-5, and then randomly distribute the hotels so that everyone gets a fair share of the good, the bad and the ugly.

The question is: how accurate are ASO, or do some teams still have an advantage? To put it another way: were Team Sky onto something when they bought their RV?

The Wisdom of the Crowd (Peloton?)

Dave Brailsford returned from a trip to Silicon Valley raving about how ‘big data’ and ‘the wisdom of the crowds’ would offer the next crucial performance breakthroughs in cycling. So what better way of analyzing hotel quality than using online hotel reviews?! There are some problems with using hotel reviews from a site like Trip Advisor (for example, see this paper). But no doubt Brailsford’s Silicon Valley chums told him about “Linus’s law”: ‘Given enough eyeballs, all bugs are shallow’. We'll just go with that.

Using Trip Advisor and the Tour de France Road Book, we identified all the hotels used during the 2015 Tour and their percentage of positive reviews – that's ‘excellent’ and ‘very good’ ratings combined. Out of the 184 hotels used by the Tour, 181 were in Trip Advisor. That includes the hotels used for the rest days and the pre-tour presentation. For those hotels, that amounts to a total of 26737 reviews, with a median of just over 100 but with a lot of variation (those in the large cities tend to get more reviews than those in the sticks).

For the three hotels who had 'missed tests' - where they weren't available - we gave them the lowest value for that stage – a bit like being relegated to the back of the peloton. Some of them might have a good excuse, however. One of the hotels without any reviews appears to be caught up in some sort of dispute with the local mayor, which might explain the absence of reviews on Trip Advisor. By using that hotel, ASO seem to be meddling in politics - plus ça change...

So, what are the hotels like at this year’s Tour? Upsetting for ASO, perhaps, the stages with the best average hotel satisfaction come on the first two days when the race is in Holland. The worst stage is the last when all teams get to stay in the Hyatt Regency Paris Etoile, which is “run down, shabby and old” according to one Trip Advisor reviewer. Stage winning hotels and those finishing in the autobus are shown below. You can see the podium for each day here. 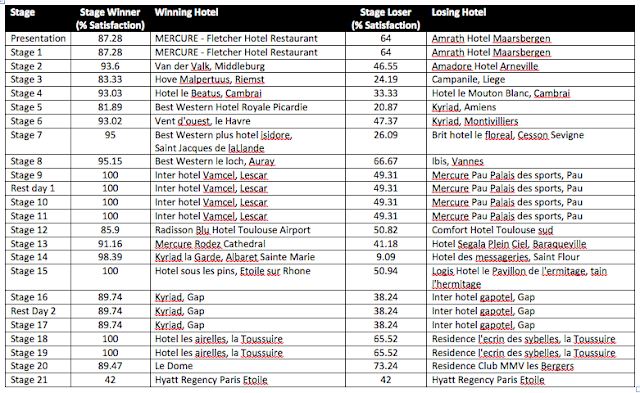 A couple of hotels have a 100% satisfaction score. Pas normal, peut-etre? Stage 9 has the Inter Hotel Vamcel, Lescar which Orica are lucky enough to stay in. Their bus driver should be careful, though: one reviewer commented that space for parking was limited. Another 100% hotel is on Stage 15 - Hotel Sous les Pins in which Team Giant get to rest their legs in. The last - Hotel Les Airelles in La Toussuire - is on stages 18/19, in which FDJ and BMC get to stay in. Mind you, that one only has 3 reviews - sort of equivalent to an incomplete biological passport.

Stage 14 also has some good hotels: the Kyriad la Garde, Albaret Sainte Marie which Astana and Europcar get to stay in has a 98% satisfaction rate. One previous guest commented that: “the staff were incredibly helpful, nothing was too much trouble. The room was very clean and neat as was the bathroom and the bed was so comfy!”. But stage 14 also has some of the worst: Le Panoramic Gararit in Anglards de Saint Flour is described as “a sad and depressing fly infected excuse for a hotel” by one past guest. Tour de France debutants MTN-Qhubeka have the misfortune of staying there. The worst of the entire Tour is the Hotel des Messageries in Saint Flour. With just a 9% satisfaction rating, one Trip Advisor reviewer describes it as a 'dirty, ugly nightmare'. Good job cycling teams have their own chefs these days, otherwise it'd probably be just bread and water.

Its worth pointing out that teams often get to stay in the same hotel for several nights, and this often occurs at crucial points in the race. For the Pyrenean stages, Team Sky gets to stay in one of the best hotels of the race (with 93% satisfaction) for 4 consecutive nights. By contrast, their GC rivals Movistar and Tinkoff-Saxo get to stay in a hotel with just a 49% satisfaction level. Maybe Sky’s motorhome wasn't needed after-all? 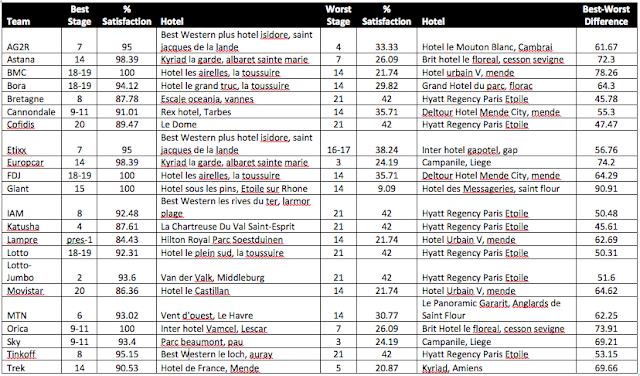 Despite ASO’s insistence, there are substantial variations in hotel quality between teams. Top of hotel GC is Lotto-Jumbo, with Lampre-Merida as the hotel laterne rouge. Maybe ASO should think about using Trip Advisor to divvy up the hotels - their classification doesn't seem to be working.

Just like the race itself, these GC positions change – although Lotto-Jumbo nearly pull off a Merckxian like start to finish hold on the hotel yellow jersey. Sky’s 4th place on GC belies their poor start in the flatlands and cobbles, only coming on strong when the race hits the high mountains. An omen perhaps for Chris Froome? 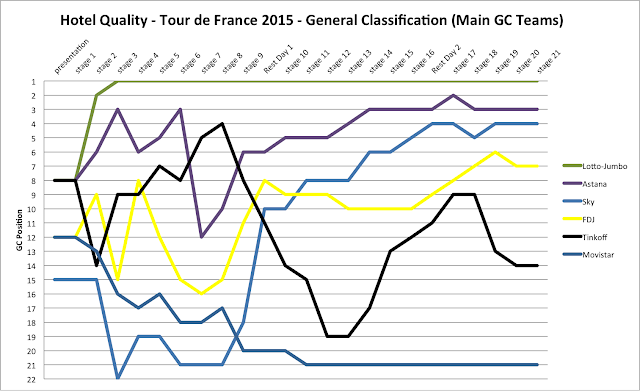 Despite what ASO say, there are substantial differences in hotel quality between Tour teams. Hotel quality does not even out over the length of the Tour. Maybe ASO’s hotel reviewers are more attuned to pro-cyclists’ demands than Trip Advisor’s reviewers. But the most common complaints in Trip Advisor are about poor quality bedrooms, cleanliness and lack of air conditioning – the same concerns that pro-cyclists have.

Team Sky may have been on to something with their motorhome, but ironically it would have served the needs of some of the riders in the poorer teams in the peloton than Chris Froome.

Data were extracted from Trip Advisor 22-26 June. Trip Advisor reviews are constantly updated – hotel satisfaction levels change over time. Don't blame me if they change when you look.
Posted by Gareth at 04:19 1 comment: