How to measure a target like the Festive 500km? In numbers, or feelings?

The numbers bit is easy: 500kms, hours on the bike, average speeds, watts, intensity factors and Training Stress Scores (TSS), all ways of quantifying the effort. But maybe the challenge relates more to feelings than pure numbers: of tiredness, pain, and memories of what’s so good about riding a bike?

Physically, last year’s Festive 500 was relatively straightforward. The challenge was mental: the fatigue of studying the weather, planning routes around the wind and crawling out of bed early enough to be back for lunch and be too tired for the rest of the day to enjoy it.

This year things would have to be different. Five days before Christmas, my wife had an operation on her hip. Immobile, I’d have to be at home to help get the kids out of bed, make their breakfast, take the dog for a walk – all the stuff you miss when you’re out the door by 7.30sm to do 100ks before lunch. The only solution was to do it all in the kitchen on a turbo trainer hooked up to Zwift. Two-hour rides between 7-9am every morning should be enough. Sat on a bike going nowhere would require additional mental stimulation, so I decided to play a game of Fifa 17 during every ride (You can read how that went here). 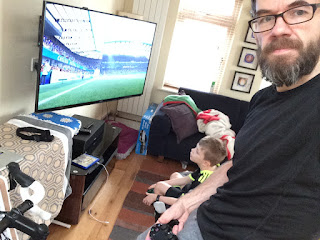 Getting ready to complete the Festive 500 whilst playing Fifa

In numbers, completing the 500ks was relatively easy. I covered 520km on Zwift and a further 105 on the road (see table below). Compared to last year my total TSS was slightly lower (roughly, the Zwift Festive 500 was 5 hours shorter than last years - Zwift kms are quicker) but average power was also higher. There were junk miles whilst playing Fifa, but I won more games than I lost. And if you include the two road rides I did it all worked out about the same. In measurable terms, the effort was about the same.

I rode with friends in Cambridge (UK), and met new ones from Austria, Denmark and Tasmania on Boxing Day. But was it memorable in the way last year’s effort had been? Watching the numbers displayed on Zwift didn't inscribe anything meaningful: whereas as I remembered being battered by rain and hills, the reasons behind every route, Geraint Thomas zooming past me on Christmas Eve on his TT bike, and the dull fatigue in the evenings, this year’s memories were pretty vacant. In the words of Edward Relph, it was a kind of placeless Festive 500. 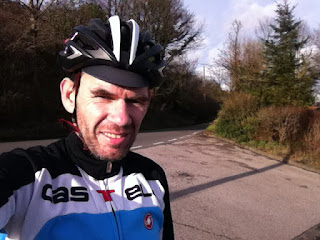 All wasn't lost: there was another story told in feelings and intensities. Halfway through the week I had a chance to go out on the road. In last year’s Festive 500, every ride had to use at least 1 road I’d never ridden along before. This ride would be similar: along the gravel road crossing Manmoel Mountain, between Oakdale and Ebbw Vale. No wind, and warm winter light made the scenery spectacular: windy lanes lined with dry-stone walls led to a bleak moor high above the valley floor.  In the distance, the familiar shape of Pen-y-fan. Tarmac gave way to gravel, which gave way to a stoney pot-holed mess, which gave way to a rear puncture on a short descent. I’d been pushing it and a pinch puncture was inevitable. I could dream of a new gravel bike with tubeless tyres. But if there can be such a thing, this was the best puncture ever.

It was a simple repair in the kind of place you might want to repair punctures. I had planned to ride back the way I came, but decided to return along the valley road. A mistake: sunlight was a stranger to the valley floor and frost lingered on the verges. In the cold I took a wrong turn up a steep hill only to return back on to the main road 100 meters further down. But despite this, it was the best ride of the year, by far. I’d be back as soon as possible. 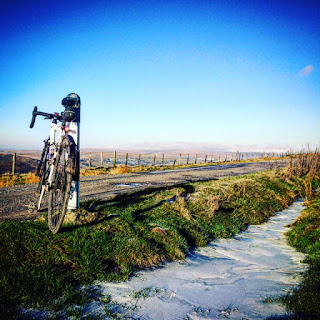 Back so soon? A week later on the Manmoel Mountain, this time in ice

They say that targets inspire perverse behaviour. That challenges like the Festive 500 cause family ructions. Targets ossify the mind: don't be innovative, don't stand out, just get the job done. But experiencing the extremes is important: it teaches you the value of the other. Getting the job done, whether inside or out might involve cycling, but it might not be cycling. Maybe its important to experience those extremes to teach us what's great about cycling. The virtual doesn't replace the real; it accentuates it. And maybe sometimes it might just be better to enjoy failing to meet a target than meet it for the sake of it.

So, on the last day of the Festive 500, rather than stick to one of my usual training routes, in light rain I rode up through the woods and into the mist on the edge of Cardiff. These will be the rides I'll do more in 2017. That's what the Festive 500 taught me. 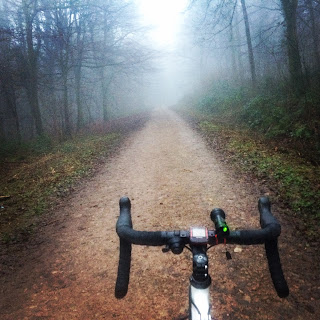 All The Festive 500 Rides

Rapha Festive 500 - the scores on the doors

Some notes from the road kitchen

The first game was played at a frantic pace, averaging 3w/kg for the entire game. Chelsea scored early on with a flowing move down the right, and I ended up comfortably beating my Son – a rare achievement in itself. Hazard scored a penalty to make it 3-0 before Anautovic pulled back a late one for Stoke. A good start. The second game was a more sedate affair, ridden in jeans and t-shirt at around 1w/kg. Two nil down to Hull after some early sloppy defending, I squared the game in the 80th minute to take it to extra time. Unfortunately, Kompany and Aguero had to go off injured and I let in two more goals. If the first day is always the hardest, then things could have been a lot worse.

Things got off to a good start after annihilating my son on Star Wars Battleground. Unfortunately things went downhill from then on (if they can on a turbo trainer…). First a 5-0 thrashing by Chelsea with me playing as Bournemouth (11kms completed), then a 3-1 loss to Watford with me as Crystal Palace (5kms). Finally, playing as Liverpool against the computer, I could only manage a 0-0 draw with Morecambe (30kms). I may have been pushing 3w/kg, but still, Morecambe? Poor.

Just over halfway, and the first signs of fatigue. The first game went OK: at 3.3 w/kg, Chelsea won 1-0 against Morecambe, Hazard striking in the first half. But then, having signed up for the Z TAZ group ride, Chelsea – Newport County was abandoned at 0-0 due to excessive w/kg. Then late in the day, another disaster: Man Utd losing 2-0 to Yeovil Town.

When your son plays semi-pro and you find out you can change the difficult settings to amateur… kind of like riding Zwift with Z-power. An easy  4-0 for Man City over Accrington Stanley. In the evening I found there was even a beginner mode – an even easier 9-0 victory to Cardiff City against Brighton and Hove Albion – a warm up to their IRL game on Friday night...

Today for something different: an actual ride outside. And one of those proper Raphaesque rides on a gravel road over a mountain. Atmospheric. Awesome. Not sure if this should count or not for the overall total. Afterwards, another 12kms completed in which Cardiff beat Brighton again 3-0, this time on amateur mode. That leaves 150k for the next 3 days. Easy.
Day 6 – 29/12 (Day: 83km. Overall: 514km)

Technically that's the Festive 500 done. But as the aim was to do it all on Zwift, I still have another 70ks to go. That’ll have to wait for tomorrow. In the meantime, Cardiff City went down 3-0 to Brighton having moved up a level to semi-pro. Later on another easy ride, but a close one between Cardiff City and Aston Villa – Gunnarsson equalising at 80mins before Pilkington scoring the winner on 90mins. 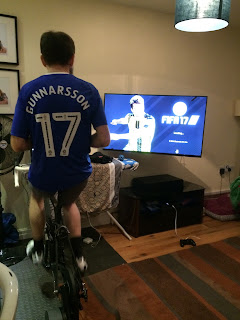 The final push was a ride with my sometime cycling partner James who lives in Cambridge. But first a local derby: Cardiff v Swansea. It was close, but Cardiff couldn't finish it off despite Swansea's poor defence. But in the 80th minute Gunnarsson put a ball through to Pilkington who finished it off. After that, I led James out for the sprint on the Mall to claim the green jersey. Later on, a beer and a ride. Another local derby - Cardiff City against Bristol City. A man sent off in the first 10 minutes! But Pilkington scored a cracking header to secure the win in the 80th minute.

Last day and another ride outside - just a short one up and around Castell Coch woods, in the rain. No more Zwift for a while.


All the scores and rides