It was a bit of fun looking at the hotels used in the Tour de France. On the Cycling Podcast, Lionel Birnie was exasperated - "what use is that?" he grumbled.

It wasn't meant to be science, not even pseudoscience.

But it does have uses.

Business and Governments around the world are increasingly using social analytics to plan ahead. They monitor conversations, look at what is being said and adjust what they do as a result. Here's one  example from the UK. You can Google plenty of others.

How is this useful for cycling teams? A quick look at Trip Advisor shows right away that the air con isn't great in Dan Martin's hotel.

A more advanced approach would see cycling teams using social analytics to analyse all their hotels and identify where such problems might exist. Then they could develop appropriate coping strategies. Mobile air conditioning perhaps?

No doubt that marginal gains is precisely what Team Sky would have done.

"To classify is human", said Susan Star once.

In other words, classifications aren't natural, pre-given or fixed, they are created, applied and evolve because of what people do and say. They are attempts to impose order - so they are instruments of and reflective of power. Whenever anyone classifies, be sure to ask why, and who made and agreed those classifications. Not least because classification has a social use: it has effects. When we classify what is normal or desirable, people adapt to those definitions. After-all, who wants to be called abnormal?

Sociologists like to think about how 'important' classifications are created - usually in the fields of science, medicine and technology. Let's instead think about how they are used in sport, and cycling in particular.

Let's start with the term 'trackie'. Frequently used derogatorily, this is someone that belongs on the track. Those trackies, they are not real cyclists, they should be out on the road - that's where real cyclists belong. So went the aggrieved argument of club cyclists, as British Cycling invested in the track in the 1990s/2000s. And that's the first point about the term trackie - that its a product of context (or environment). For without the focus and £000s being invested in track cycling in Britain, some of today's top British cyclists wouldn't have ridden it. That doesn't happen in other countries, but explains why those cyclists are associated with the track. It explains its pejorative use too.

But let's also not forget that one reason why many top British cyclists have come through the track is because of the roads. Its no coincidence that the perceived danger of British roads means parents are happy to send their kids to cycling facilities. And its no coincidence that some of the best youth cycling clubs are based at tracks. You don't have to read David Epstein's The Sports Gene to realise the significance of environment in this case.

Neither do tracks determine physiology. Track teaches race craft, but its primarily an endurance sport the same as road cycling. Its no surprise that the best cyclists have ridden and won medals on the track. Greg LeMond, for instance. Of course, you knew that, didn't you? And more recently, climbers like Simon Yates won the points race in 2013. But wait: how can a climber be a trackie? This classification game is getting confusing...

When Nairo Quintana started the 2015 Tour de France, he was labelled 'the world's greatest climber'. Im not sure where this 'award' came from, but if a climber like Simon Yates can win a track title, what exactly is a climber? Is a climber an unpredictable character, like Ocaña or Pantani, with rapier acceleration? Or more of a slow burning diesel like Quintana? Or someone who can ride the track like Yates? And do we believe Quintana can't ride a time trial? Last time I checked he could - should we call him a 'tester' now as well? Because if we cant decide on what or who is a climber, these classifications cease to have much relevance.

Historians would probably suggest that these classifications say much more about how cycling has relied on the creation of myths. As Benjo Maso points out, how we understand the Tour is entirely shaped by the mythologising of events to suit the organiser's purpose of making the event as popular as possible. Reporting the Tour would revolve around storytelling and the creation of characters. It had to: no-one could tell what was going on in the race before TV. Even radio reports were made up. And essential for these stories were the categories of 'climber', 'baroudeur', 'rouleur' etc.

Classifying cyclists was an exercise of a previous era, when racing was different, its purpose to serve social and economic interests. This doesn't mean that all endurance cyclists are physiologically the same. But we'd do well to remember that those classifications are constructed, and fit the context they were made in - not just the social context, but also the context of the racing itself.  As contexts change, so must the meaning and application of those categories. And when those classifications themselves overlap or have multiple meanings, is their use reduced to insulting and insinuating, as part of a fight over who has the right to speak about cycling? Isn't that the new context facing cycling?

Classification may work as a convenient shortcut. But as someone once said: there are no shortcuts in cycling.

Transfer Distance and Hotel Quality in the Tour de France 2015

Analysing the quality of hotels in the 2015 Tour made me wonder if there were any factors that could lessen the impact of poor quality hotel. For example, are the teams that travel furthest rewarded with an excellent chateau, whilst those a stones throw from the finish line have to slum it in the local Ibis? At least those with the shortest transfer won't have to be cooped up in their team bus, stuck in a traffic jam for hours on end. I'm guessing that riders might prefer that, even if that means their hotel isn't that great and they have to travel further in the morning to the stage départ.

So, using Google maps we calculated the distance from the stage finish to each of the hotels. We took the recommended route suggested by Google, even if that was a slightly longer distance than the shortest. For the transfer after stage 9, we used the distance from Pau airport to the hotel. We also recorded the travel time suggested by Google. All times were set for an evening rush hour to mimic the large amount of spectator traffic. No doubt these may not accurately represent the time taken to get off a mountain - riders have recounted tales of being stuck for hours on end on Alpe d'huez, whilst the maillot jaune gets airlifted off in a helicopter. This year, at least, the riders will be staying overnight on the Alpe - it's the Pyrenean mountain stages that might cause problems.

Here's what the data said.

Overall, the average distances between teams is fairly similar, ranging from 33km/stage to 43km/stage. Astana comes out the best overall. Team Sky come in at 41km. Not great differences you might think - but look at the overall distances. Over the entire race, Astana's transfers add up to 703km. Sky's are 862km, and Cannondale's just over 900kms. Those little differences all add up - marginal gains that are sure to worry Dave Brailsford. You might think that some of these differences may be made up the following day - the teams that travel further after the stage may have less distance to go to the following stage's start. In fact on some stages, hotels with large transfer distances are not much closer to the start the day after than those with short distances. 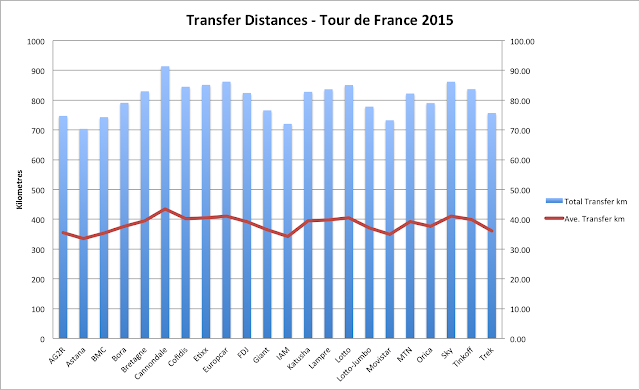 As you might expect, average transfer distances vary each stage. The first week isn't too bad at around 50-60kms average. But no-one will be looking forward to the horrific transfer on stage 12. After finishing on top of Plateau de Beille, after waiting for the grupetto, the teams will have to get off the mountain and drive around 140kms to their hotels near Toulouse. The hotels might be a bit noisy too - they are all at Toulouse airport. Quelle horreur! 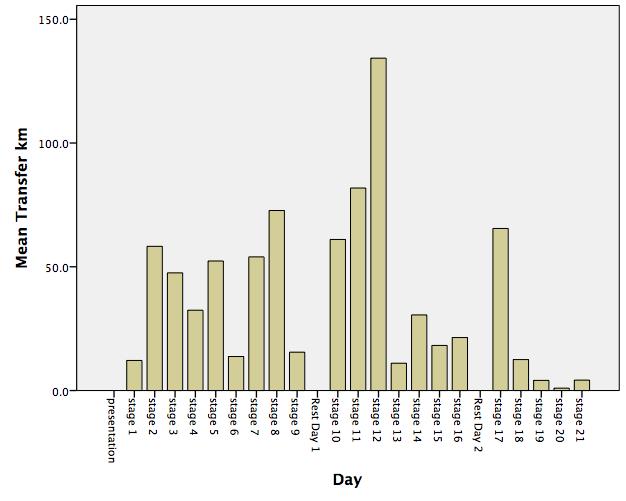 Looking more closely at some of the key stages might also ring alarm bells in some teams - particularly Team Sky. After stage 17 to Pra Loup - the first big Alpine rendez-vous - Astana are lucky enough to have just a 26km drive to their hotel. Team Sky meanwhile will need to trek 98kms to theirs. Tinkoff don't come off much better - its a 70km drive for them. You can see the transfer distances for all stages and teams in this table: 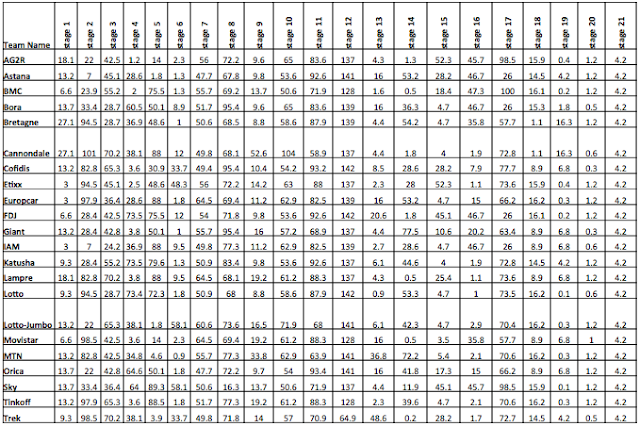 If you were hoping to find a relationship between transfer distance and hotel quality then you'd be disappointed. If your transfer is long, then you might end up in a nice hotel, but you might not. Its pot luck. 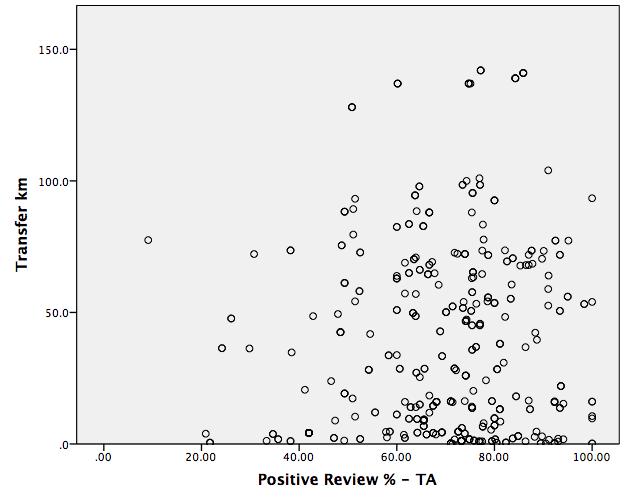 In a rough and ready way, we've combined the rankings of hotel quality and transfer distance to create a (limited) overall index of 'tour hotel experience'. We ranked hotel satisfaction 1-22 (highest to lowest), and transfer distance 1-22 (lowest-highest) and then added those ranks together. The index gives equal weight to distance and quality, but it gives us some an idea of who comes off best when you factor in transfer distance.

Overall, Astana finish in first place, thanks to their short transfers and 4th place in the satisfaction GC. Movistar move out of the relegation zone and up to 13th. Team Sky is one of the big losers, falling to 15th place in the new league table. Tinkoff are slightly lower in 18th, with Europcar sitting at the bottom.


So, plenty to think about for some teams. When it comes to either hotel quality or transfer distance, it seems that there's still plenty of variation between teams that ASO might want to address in future.