I should win an Ignoble

I think I may be in line for an Ignoble award!

When this year's awards were announced recently, the one that caught all the headlines was this one about Beetles having sex with a beer bottle. The BBC reported that this way:


Darryl Gwynne and David Rentz' study of buprestid beetles began by accident one morning on a field expedition in Western Australia when they found the insects trying to mate with brown "stubbies" left by the side of the road.
"It was just co-incidental that my area of research was Darwinian sexual selection and how sex differences evolve, and here was a classic example taking place in front of my eyes where males were making mating errors.
"It was very obvious the beetles were trying to mate. These beetles have enormous genitalia, and they're large to start with - over two inches long. "The sad thing was that these beetles were dying; they wouldn't leave the bottles alone. They'd fall off them exhausted.
"It was almost certainly the visual colour - the bottle looked like a giant female. And also in the reflectance patterns - there were stipples on the bottles that resembled marks on the females' wing covers."

Ha! Well I can top that...After my ride last week I noticed something odd on my bike as I was about to put it away: a grasshopper having it off with the valve on the inner tube. Here's the evidence: 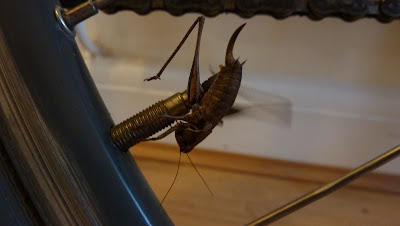 This doesnt just prove that grasshoppers are sexually attracted to inner tube valves, but also that they can withstand being spun around at high velocity for extended durations of time. On my ride I stopped twice to take a photo and leant the bike against some grass in a hedge: it must have been then that the grasshopper spotted the love of its life. The first time I stopped was about an hour away from home, the next time about 45 minutes. That's some spinning.

How do I claim my prize?

Today, another comeback. First ride in 2 months: but with a clear target of Ventoux in May/June next year. There's nothing in the way. I have even spotted a nice new bike that maybe I could get for my birthday in March (?).

Todays ride is turning into a favourite. Up the valleys (chilly despite the heatwave), then over Williamstown where I stopped to take a picture:

I came back through llantrisant forest and the vale lanes. Felt OK, but lots of work to do!